Over the past several years, police officers in the United States have abused their power by using force against people.

Over the years, it has been proven that police officers aren’t accused for their crimes. The numbers of deaths and criminal charges back up this idea.

It has been said that police officers are able to get away with anything they want and we are just realizing the things they are capable of getting away with. There is corruption in the police and they have been getting away with it for a long time.

It is astonishing to us that law enforcement officers are not being held accountable for committing acts of violence such as excessive use of force and murder of unarmed victims.

According to Mapping Police Violence, ever since 2013, only 1.7% of police officers have been charged with a crime.

Police officers tend to have a power complex and believe they are superior to others because they have the authority to use weapons against other people.

They are allowed to interrogate anyone they feel looks ‘dangerous’, also known as racial profiling, or use excessive force towards those detained. Police officers hardly ever get charged for their crimes, and to this day continuously target people of color.

According to News 12 The Bronx, a police officer shot an African American man that was reaching for his wallet. Although the man had told the police officer that he had a registered gun with him, there was no reason for him to be shot. 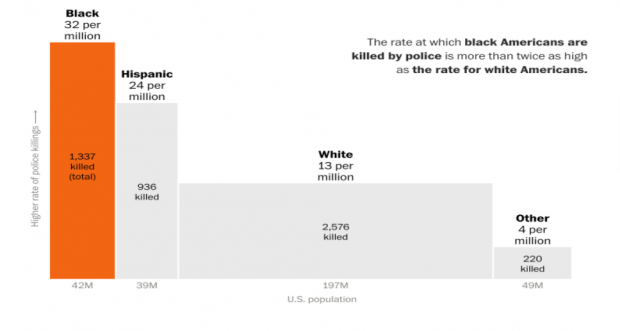 Graph of police killing rate in America by race. The Washington Post

Many protests have been surging up since the start of the Black Lives Matter (BLM) movement. Although the BLM movement has been around for many years, the unjust death of George Floyd marked the first time in some years that the movement has been going constantly and in the eyes of the media. The exposure that his case received through the media sparked protests that have been going on ever since.

Numerous organizations and people have allied themselves to the movement and taken to the streets to join these protests against police brutality. There have even been people of all ages, especially young people, that have come out and started protests. Amongst them are people that are able to recognize these types of injustices in their daily lives as kids, especially in poorer areas with minority inhabitants.

Rodriguez has gone to many peaceful protests before. However, she recently got attacked at one of the protests she attended. She went to the Hollywood protest on September 5th 2020. She described her experience as “something you only see in movies”.

During the protest a barrier was made for a woman who wanted to speak but was scared of getting hurt. Rodriguez said, “as soon as she started speaking they started to tear gas us and it made the lady more terrified.” She went on to say how fear is a tactic police use to silence the people.

Rodriguez also touches the topic on how her friends are scared to be the next person people are protesting for. “The system is deeply corrupted and the only way we can fix it is if we shut it down and make it new.” We shouldn’t have to live in a society in which people at such an age — or any age — worry for their lives due to the color of their skin or where we wonder if we should be scared of a system that should be protecting us.

Note: There are many more details of the police brutality and statistics about how many people have been killed, hurt, or what group of people have been most affected. The articles listed down below are some sources we used to make this informative article possible.

We have used credible sources and interviewed someone who was there in the protest against police brutality and described how the police have retaliated. There are statistics of how people have been greatly affected by what the police have done to “protect” us. Ways to stop police violence is to defund the police, donate to organizations who are against police brutality, or sign petitions.