The fast fashion industry is contributing  to the destruction of our planet, with the influx of micro plastics and damaged aquatic ecosystems. In the 21st century we live in a world of over consumption, the necessity for more affordable and readily available clothing has sparked an industry that takes advantage of people, resources, and the environment.

The term “fast fashion” was first coined by the New York Times in the early 90s, it describes clothing designs that transfer from catwalks to stores that take advantage of trends. The fast fashion industry has changed a lot  since the 90s, when trends would last a couple months, they now last a couple weeks if they’re lucky. This contributed to a habit of discarding clothing that was worn prematurely.

Companies such as SHEIN, ROMWE, Pretty Little Thing, Boohoo, H&M, and Fashion Nova release new products on an almost daily basis. Many of the clothing designs these companies sell are actively stolen from smaller and or independent companies. A lot of the manufacturing from these companies happens in developing countries whose economy relies heavily on the textile industry for jobs.

Countries such as Bangladesh, Vietnam, Honduras, and China have workers that mass produce clothing for these companies. These overseas factories do not have universal regulations for the conditions factories must comply with.

A New York Times article called “Who Made Your clothes?” interviewed garment workers from certain countries to get an understanding of what they go through. The interview with Pakistani textile worker Waheed uncovered this industry.

“It’s pretty common to get your fingers injured — sometimes needles break and get stuck in your bone if your hand gets in the way of the machine. Then you have to go to the hospital and get X-rays yourself,” said Waheed.

In addition to being denied compensation for their injuries, workers are stripped of their basic human needs.

S. is an employee in India that makes socks and pants for a fast fashion company. “We don’t even have the freedom to drink water,” S.said, adding that management doesn’t allow employees to bring in water bottles.

Textile and garment workers in developing countries are living with dollars a day and have to support their families. In addition to low wages these workers live in constant fear of their factory losing their primary client. Especially when many textile workers are specialized in certain items.

“It’s difficult to manage on the salary I earn. My expenses amount to about 2,000 rupees a day, including the cost of my children’s clothes, their education, my family’s groceries and other bills. But I barely make 1,000 rupees a day.” said Waheed.

When converted to US dollars,  this amounts to $5.87 daily income while their daily income amounts to $11.73 when converted. Many employees are loyal to their factory because they have no other option when it comes to working. They are then thrown into a cycle of debt and constantly fear losing their jobs.

To combat their families’ debt and poverty, many children take positions in these factories as regulations do not exclude child workers.  In 2018 a  U.S. Department of Labor report identified the use of child exploitation and labor in countries that the fast fashion industry relies on.

The low mass production cost for these textiles is partly due to being made up of synthetic materials. In an article by Science Direct it was found that about 35% of all microplastics are derived from synthetic materials used by fast fashion manufacturers.

Microplastics are tiny pieces of synthetically produced plastic debris that do not decompose and consistently get smaller until microscopic. They make their ways through the ocean and are eaten by sea creatures and in conjunction with overfishing means that these microplastics may end up in your food.

Twenty years ago people discussed the effects that global warming would have in the future. We now live in that reality and under a time constraint to create change before we reach 2030,  where the irreversible effects of climate change will take hold on our planet.

The fast fashion industry creates a big carbon footprint on the environment. Using synthetic vivid dyes for clothing make their way into rivers and the ocean. 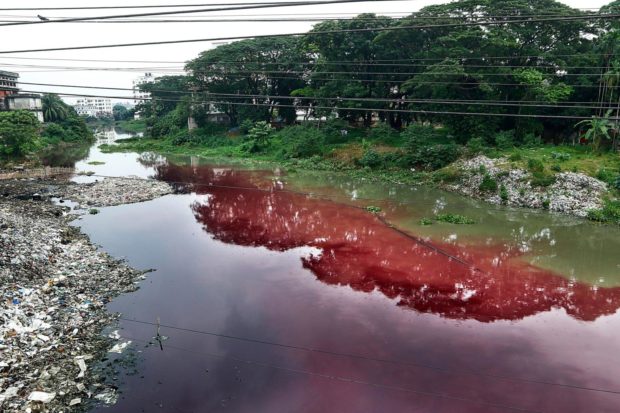 Photo of polluted river due to red dye. Source: shutterstock.com

Further destroying aquatic ecosystems and the food supply of many coastal communities. But the clothing itself has become a problem.

Clothing that has been before it was fully used would add up to over $400 billion dollars. With over a million tons of clothing in landfills, it all has to go somewhere. Many of the clothing that we discard ends up in countries such as Ghana, where they are then put into landfills and left to ‘rot’.

The local textile industry in Ghana is almost nonexistent due to the market of used clothing from developed western nations.

We are then left to wonder about what we as consumers can do to minimize the effects of this industry. The most obvious answer is to stop purchasing from these companies.  This isn’t applicable to all as many lower income and or plus sized people still rely on affordable, fashionable, and readily accessible clothing.

Although much blame has been placed onto consumers, we must understand that these companies are responsible for the decisions they make. They actively decide to minimize the cost of ethical practices and choose the easy way out.

As consumers we must hold these companies accountable for their actions. We must diverge our shame onto the industry itself opposed to those who partake in it due to survival.

We all have a responsibility to take care of each other and the planet, and in order to do so we must all remain aware of these practices and become conscious consumers.