Colin Kaepernick, football quarterback for the San Francisco 49ers, has recently sparked a debate involving protest, patriotism, and basic human rights. Beginning in August, Kaepernick has refused to stand for the pre-game national anthem. When asked why he would do such a thing, he told NFL Media, “ I am not going to stand up to show pride in a flag for a country that oppresses black people and people of color.” Many other athletes have followed
his example, locking arms or kneeling during the national anthem. 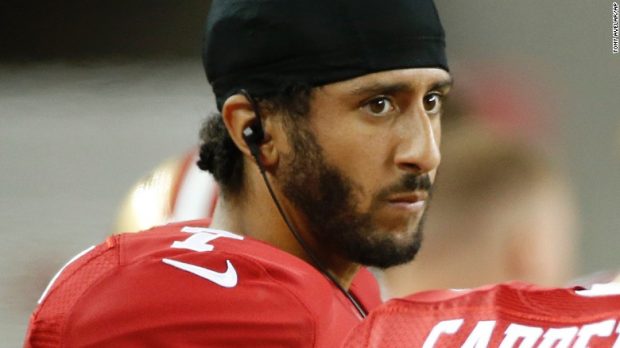 49ers’ coach Chip Kelly told reporters that Kaepern
ick’s choice is “ his right as a citizen”. Therefore, Kaepernick has not been suspended nor fired from his team. Many fans and celebrities have expressed their support for his stance against the racial injustice in the U.S. and his form of protest.  Not only does his coach support him, but so does the NFL. In a statement, the NFL said that “players are encouraged but not required to stand during the playing of the national anthem.”

Despite Kaepernick’s reasoning for his actions and the support of other people, there are still some who greatly disagree with what he did. Many of those who oppose Kaepernick claim that it’s “unpatriotic” to not stand for the national anthem. Some of them argue that Kaepernick should have more respect for the flag since there are people who risk their lives to fight and protect it. However, even some of those people who risk their lives support Kaepernick. There are veterans who are in favor of his actions and say that they fight to let citizens be free to make their own decisions. 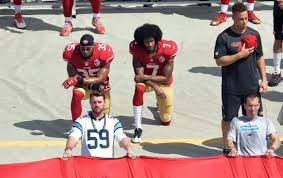 Kaepernick’s actions are valid. According to the first amendment in the Bill of Rights, Kaepernick has the right to peacefully protest by refusing to stand for the anthem.  The main issue here involve morals. In our eyes,  Kaepernick’s response to the brutal relations between police and African Americans was the right decision. Athletes are constantly being targeted by the public eye and everything they do is magnified. Because he used his name and fame for an act of protest, it immediately shines a much brighter light on the dire situation as a whole. Additionally, the national anthem is just a song just like the American flag is just a piece of patterned cloth. It is the meaning and promise behind it that makes them important. If the promise of liberty and pursuit of happiness is not being given to all of American citizens, then those items do not have all the power some proclaim they have. We are in a time where people are afraid of being killed by the very people who should be protecting them. Hopefully, this public act of protest will get more people involved in the change that is necessary to make this country great again.