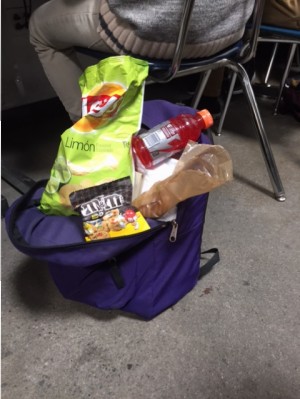 Our vending machines have been torn away from our APB hearts and it has caused such a stir here at school. APB staff members have always promoted healthy eating and said that junk food was not at all the best choice, but students never thought they would take them away. As soon as students realized that the vending machines were gone, they began to plan alternatives.

Leticia Nolasco, a Parent Coordinator and our “lunch lady” claimed “The students were very upset, they asked when were they going to bring back the the vending machines and said they will bring chips from home.” The students in other words will not let the lost of the vending machines stop them from eating the snacks they enjoy the most, chips. Mixed emotions were given throughout, Tirsa Barbero, the School operations Manager said “The students were surprised, sad, others were upset and some appeared to just ‘not care’”. She mentioned that people adjust and so would the students, which of course is true. Students are stacking their backpacks with snacks and not letting the absence of their beloved vending machines impede them from eating something they’d enjoy.

The lost of the vending machines have caused the school to have a sort of black market system. If the school did not already feel like a prison, best bet it does now. People are calling their parents to bring them chips and snacks during lunch. Not to mention it is a little funny how students are finding ways to get the unhealthy snacks during lunch. At least the vending machines provided the students with some what healthy food, they had baked snacks, smaller bags of chips and granola bars but now students are bringing big bags of chips, Arizona drinks and their sodas. Which is not at all healthy and the school is trying to help us eat nutritious meals.

Not only are students coming up with alternatives but so are the staff members. Brian Reed, the school’s Vice Principal, stated “Next year, we will be providing the student with a nutritious breakfast and lunch plan”. He also claimed that the school will be having a new food vendor starting next year as well. Other schools such as Animo South LA use this new food service and it appears to be better than the food service now.

Eager to know who are at fault for this tragedy at Animo Pat Brown, Tirsa claimed that it was “The person in charge of School Nutrition Programs”.  He had the barbaric idea to take them out in hope that it would encourage students to eat the lunch provided at school. Both Tirsa and Reed hope that the outcome of taking out vending machines would be just that, however, Leticia said “Although, it is what they wanted, there is still no difference, the same students who got lunch before, are the same ones who get it now.”

Students alongside with some staff members did not know that the vending machines would be taken away, it happened suddenly. Brian Reed and Tirsa said that they knew it was coming they just did not know the date. The main motivator to take out the vending machine was that “It was inappropriate for a school to sell unhealthy snacks to the students”, Brian claims. However, they do plan on rewarding the hardworking students at Animo Pat Brown, by continuing to sell on Fridays as long as they receive help from parent volunteers.