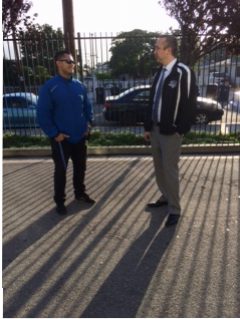 The safety of all students is one of the main concerns that APB staff members are constantly trying to battle against. September 15, APB encountered an incident that left parents and students concerned about how safe APB really is.  Campus Security Officer,  Chris Garcia along with other security officers were told the safety of APB students was in questionable danger due to a call about an unknown weapon on campus. CSO Garcia was then asked to search sophomore boys along with a few other upper-classmen who could have possible been involved in the situation. As seniors at APB, we’ve been around for some of the saddest and some of the happiest moments at APB, and through everything one can note that students, office staff, teachers, janitors etc. are like  a big inclusive family that are very united, which is why the code yellow was such an unexpected event and was such an eye opening experience.

The code yellow in the eyes of APB’s principal, Mr. Reed, and CSO, Mr. Garcia, went very well, “students were cooperative, when searched” said Reed. Junior, Brian Aguilar, describes when they were searched, “They were padding down people… boys only.” He thought that it was a little injustice that only boys were being searched,unaware of the call that was placed earlier that day. He adds that before being searched, Mr. Reed explained to them that they were going to be searched, but did not explain why. Some students, like Karime Granados, believe it was unequal that only the boys were searched. Students feel that it would have been more equal if both girls and boys were searched. Students at APB argue whether they wish they were informed about why the code yellow was held. Senior, Soyner Davila, is indifferent about being notified about the search. Unlike Soyner, Karime would have wanted to be informed about what was going on because it impacted the school as a whole.

APB is an award winning high school that truly wants to see and help all of its student succeed, which is one of the main reasons why it feels like such a safe, loving environment.

APB is a public charter school located in south central but just because the school isn’t in the best neighborhood, the school itself should not have to face issues that are more than common in this neighborhood.  When students were asked if they believed APB was a place where they felt safe, the answer was always yes. Brian like many others questioned why they were being searched but cooperated fully. Staff members did not communicate the situation to students who were being searched which made some students uncomfortable. An important question that was brought up was whether or not students have the right to know why their being searched ? Some students jumped to the conclusion that they had been searched because of the way they dressed, or behaved. The code yellow left students puzzled about what was going around in their school.

The code yellow left teachers and staff members questioning what possible actions students, parents and staff members could  take to make the school a safer environment. “When people feel like they belong here they want to make this a good place to be” said Spanish teacher Ms. Yokota. Yokota believes that building connection with students is an important way to ensure that student feel safer and more willing to look out for each other and the school. APB is our building it is our job to treat it with care, “students need to think about what kind of place they want APB to be” mentioned Reed.