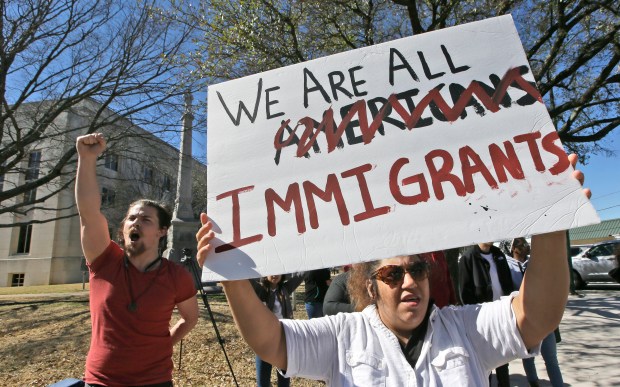 Cities all over the country participated on Thursday, February 16 on a day without immigrants where immigrants and their children would stay home and not go to work or buy from stores or go to school. Many businesses didn’t open and many who did said they were going to donate to a hispanic non profit organization. For the first time I saw many people contribute to this day and proved that without immigrants this country would go to ruin because immigrants contribute the most to the U.S economy. There has been many marches against Trump that even I have been to, but I think this is what we needed to do to prove that we need immigrants in the country. My family was a part of this day and decided to all stay home. I went walking around and saw many businesses closed, I went to the stores to see if there was people, most of the stores were lonely or closed and the parking lots were empty when usually they are always packed.

Many of the parents informed their children about this and they told them to be a part of this day, like Sajuana Gonzalez said “ I told my daughter we’re not to buy anything and we are not to eat out… This is how we are going to make an impact… so the government can acknowledge that we contribute to the economy, to the culture” (Day Without Immigrants, CNN). Immigrants play a huge role on the U.S economy, they not only contribute to the economy but they are also the ones who work on the fields. It is a myth that immigrants push Americans out of jobs, they just occupy and fill in jobs that Americans cannot and will not do. Everyone has different opinions about this and they think that this day was ineffective. Mr. Reed said this day was good for people to get united and fight for what we believe. He agrees that we shouldn’t have only done this for one day, if it would’ve lasted for more it would’ve had a greater impact and the government would have noticed that we really want a change. The problem with this I think is that many of us fear what is going to happen next and we decide not to do something to be heard because we are scared of the consequences. If people miss work there is a chance that they might get fired and they need the money for their children. So in cases like this what do we do ? Other people think it is ridiculous to go out and protest for change, but if it is not like this our voices will never be heard. Mr. Garcia said “everyone is an immigrant , even white people”. He thinks that many people weren’t a part of a day without immigrants because they have to think of their families first and the consequences that would bring if they miss work. We asked David Rios about what he thought of this day and he said, that this day was only going to get people fired. He claims that they refer to Mexicans as drug dealers, rapers, and bad people, but it is not like this. Not all people are like this and he thinks we should do something different, something that won’t get people fired or get them in any problems. I think it is time to do something big and it is time to be heard. We should all get together to make a change. We should all support each other and help each other through everything.