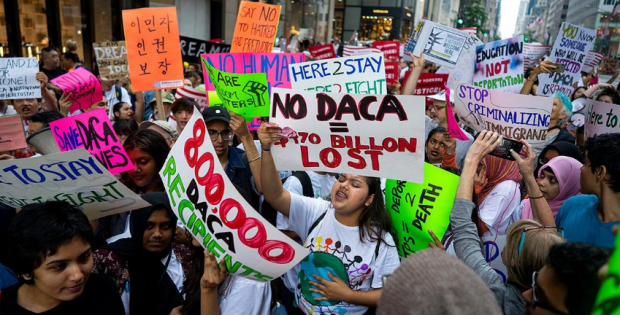 On Wednesday, January 24th, President Donald Trump stated that he’s open to offering a path to citizenship, for young undocumented immigrants who were brought to the United States as children.  “We’re going to morph into it. It’s going to happen at some point in the future,” said Trump after a reporter asked if he wanted citizenship for Dreamers. He is saying that citizenship for Dreamers will eventually happen. Trump on Twitter said “I have offered DACA a wonderful deal, including a doubling the number of recipients & a twelve year pathway to citizenship.” Over 800,000 Dreamers, with no criminal record, will be able to become citizens in 10-12 years. However, in order to become a citizen, recipients first need to do a “great job” and work hard. Meanwhile, he said DACA recipients should not be worried if their status expires.

If he does offer citizenship to Dreamers, that would cause an increase in security at the border. Trump wants $25 billion for a border wall and $5 billion for other security measures. The president explained, “If you don’t have a wall, you don’t have DACA.” The wall would be 800 miles of new construction. However, if the wall doesn’t happen, DACA itself would also not happen.

DACA recipients are given the opportunity to apply for citizenship is great news for many hard working individuals who really deserve a chance to obtain citizenship. President Donald Trump explained, “Somebody does a great job, they work hard — that gives incentive to do a great job. Whatever they’re doing, if they do a great job, I think it’s a nice thing to have the incentive of, after a period of years, being able to become a citizen.” Recipients should be motivated to work hard by knowing they’ll receive citizenship after working hard.

However, many believe becoming a citizen after 10 years is unfair. DACA recipients already work hard enough to earn DACA. Junior, Liliana Rodriguez says, “I don’t believe him about proposing citizenship to DACA recipients.” Furthermore, she believes President Trump will soon change his mind. It is hard to believe this will actually happen ever since Trump ended DACA September 5, 2016.