After ten years of building up the story, Avengers Infinity war has finally arrived. This movie has been assembling since 2008, with the beginning of the Marvel Cinematic Universe, or MCU. It all started with Iron Man back in 2008. Iron Man was the first movie of the MCU that introduced a new era in superhero movies. Ever since then, there have been other movies connected to the MCU like Captain America, The First Avenger, Thor, and The Incredible Hulk. In total, since the beginning of the MCU there are 19 Marvel movies that are all part of the Marvel Cinematic Universe and are all connected including of course, Avengers Infinity War. Avengers Infinity War has been one of the most hyped up films for awhile now and it has finally arrived. 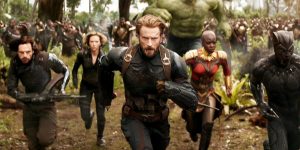 Avengers Infinity War is the longest Marvel movie to date at 2 hours and 40 minutes. It has a lot of story to tell. In the film, Thanos has grew tired of all the villains failing to get him the infinity stones for so long and decides to do it himself. The movie takes place moments after the ending of Thor: Ragnarok, with Thanos finally taking the quest to get all six of the infinity stones to his own hands. Once he gets all six, he will have the power to take out half of the universe with just the snap of his fingers. 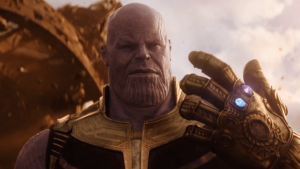 The movie was amazing. It had plenty of action, funny moments, and some sentimental moments. There was also many unexpected twists that were very shocking and special appearances that just made crowd’s gasp. The ending was a big cliffhanger and just makes me the audience want more, but we’re going to have to wait until next year to find out what happens in part two. Avengers Infinity War is out now and it’s one any Marvel fan will not want to miss, so go out and see it! Also, do not forget to wait for the end credits scene, it reveals something big for what’s to come!