Donald Trump has issued a Government shutdown with the goal to get the House to authorize him 5.3 billion dollars to pay for a wall on our southern border to keep illegal immigrants out. But even if he got the money it will take him at least 10 years to build the border wall, even with 10,000 workers.

Building the wall seems to be Trump’s main priority at the moment and he believes that building the wall will result in a decrease of violence caused by migrant people, by lowering gang violence, the distribution of drugs, and the “stealing” of jobs. Americans who oppose the claim believe that the money that would be spent on the wall would have much better uses. For example; “Mr. Trump tweeted that the meeting with Mrs. Pelosi (D., Calif.) and Senate Minority Leader Chuck Schumer (D., N.Y.) had been a “total waste of time” and said that when Mrs. Pelosi told him Democrats wouldn’t approve border- wall funding, “I said bye-bye, nothing else works!” (The wall street journal).

The government should use not waist money on build wall and instead use it to support other issues.

Congress does not want to pay for the wall so Trump supporters created a Gofundme drive in December to help pay for the border wall.

Brian Kolfage created a gofundme to build a wall to help the government to build the wall.

If 63 million people were to donate $80 each, as Kolfage suggests, it would raise $5.4 billion,

But after discovering that the man was actually scamming the people donating the money, he wanted to build the wall himself.

“We are better equipped than our own government to use the donated funds to build an actual wall on the southern border” (Gofundme). 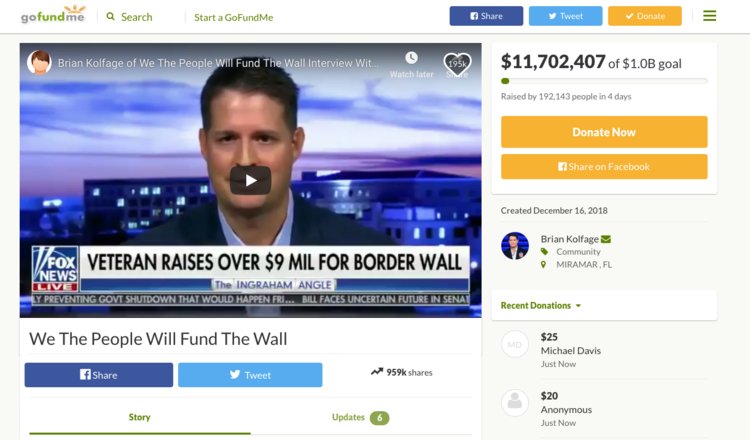