The amount of students who get detention every week at APB is very high and it is mostly due to the fact that teachers give out detentions to students every time students want to go to the restroom when they run out of bathroom passes, According to Assistant principal Mrs. Wilson.  Every Friday, on the last day of the week, students get picked up from their 6th period classroom and are escorted to a different classroom where they serve their detention. This year detention is served in Mr. Villagomez classroom every Friday after school. Most students are often given detention by teachers or administrators because they were either tardy to class, disrespectful, violating the uniform dress code, missing materials, or they go to the restroom and have no bathroom passes etc,. Therefore, whenever a student fails to get to class on time or doesn’t follow the expectations, they receive a yellow slip the following week on Monday during 2nd period to remind them that they have the rest of the week, until Friday to serve their detention with a teacher during lunch, in guided study or after school. Although, now- students have lately been receiving a second detention reminder on Thursdays, to remind them to make up their detention with a teacher before they get picked up Friday after school. Senior Brya 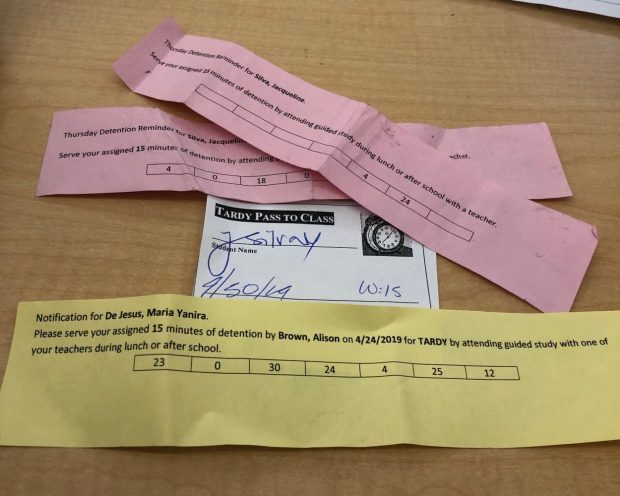 n Factor says, “I am most likely to remember to serve my detention because of the Thursday reminders” when asked if the Thursday reminder slips were actually helping. Also, senior Jessy Alvarado said, “I would rather serve my detention with a teacher than stay after school on a Friday”. “In the beginning, they actually did go down for a little bit but then slowly started going back up” Says CSO Garcia. When Mrs. Wilson was asked why she started the detention reminders to begin with she responded “I noticed that most of the students who have detention also have F’s in some or most of their classes so what I did was begin to think of ways to make them spend more time with their teachers to raise their grades back up and I ended up doing this”. Therefore, the detention reminders on Thursday’s deem to be quite helpful and effective.