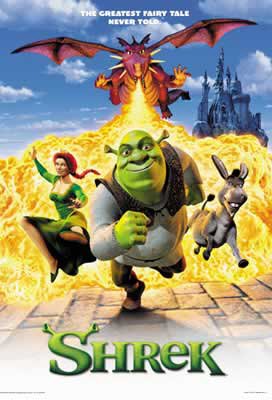 The Shrek fairytale book in the film Shrek may not be fiction after all. Shrek was based on a children’s picture book written by William Steig in 1990 and inspired an amazing movie.. I recently rewatched it and came to the conclusion that it is one of the best movies ever made.

The movie is about an ogre who loves solidarity, but one day fairytale creatures begin to invade his house. The characters had been kicked out of their kingdom by Lord Farquaad. In desperation, Shrek made a deal with Lord Farquaad, to save his bride to be in exchange for the characters to return back to their kingdom. Shrek and his very talkative friend, Donkey go save the princess from a fire breathing dragon. Shrek falls in love with the beautiful princess but it is later discovered that at sunset, Princess Fiona becomes an ogre. The two fall in love and it is a fight to keep Lord Farquaad from marrying the princess.

The movie contained lots of funny situations and jokes, which made the movie enjoyable.The artwork was beautiful and detailed. In contrast to other animated films, the story did not follow the stereotypical story of prince charming saving the princess but instead and ugly ogre and a princess falling in love. The extra characters and references to other fairytales made the movie funnier and more entertaining.The movie was a good length and entertaining enough to keep the audience captivated. The funny scenes of the dragon falling in love with donkey, the funny characters like the pigs, wolf, and mice, as well as Lord Farquaad kept me attentive and laughing at the movie.

Overall, the movie was very entertaining and made me want to watch the rest of the movies. The movie was beautiful in a literal and figurative way as well. The jokes were funny and easy for everyone to understand. Not to mention, the music choices were accurately chosen.