By Jasmine Minjarez and Jennifer Garcia

Standing up to participate in the pledge of allegiance may seem mandatory in most public events. However, many people have recently started to go against promising their loyalty to the flag of the United States, such as NFL players. Some teams as a whole have knelt during the pledge of allegiance such as The Dallas Cowboys and The Baltimore Ravens to stand up against the racial injustices in America. Racial injustice has taken a whole new route since Donald Trump took office. 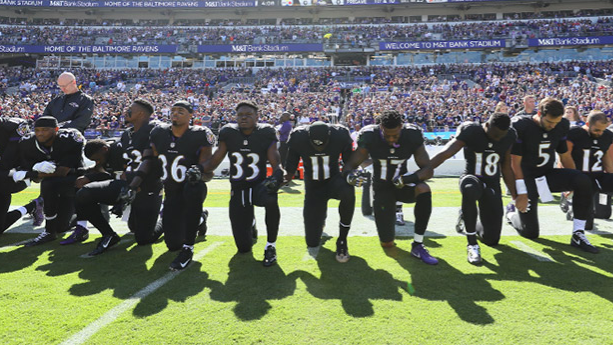 The Ravens kneeling down during the national anthem.

The kneeling during the pledge started with Colin Kaepernick, a former player of the San Francisco 49ers back in 2016. Initially he sat during the pledge, and later decided to kneel. This year, football players have taken his example by refusing to stand during the national anthem. This has built controversy because many believe that they have the right to protest, whereas others think it is disrespectful.

The majority of students at Animo Pat Brown seem to agree that these players have the right to protest and that it is not disrespectful.

Junior Mark Alvarez said, “It’s not disrespectful because it is trying to make a good cause to open people’s eyes”. Mark argued that these protests are a positive thing because it will make people aware of the injustices going on in The United States.

Senior Tereza Vasquez said, “I think it’s not disrespectful because they are standing up for their own people.”

Even Junior, Rocio Castro said, “I don’t think so because it comes with our first amendment which is freedom of speech”. Most student seem to agree that because of freedom of speech, these players have the right to protest. Some argue that protesting the anthem is disrespectful for soldiers who have died fighting for this right, but when asked whether it was disrespectful to the military, Rocio continued to say, “I don’t think so because those people fought for the right to do what you feel is right”.  Rocio states that because soldiers died to give us freedom of speech, it is not disrespectful to use this freedom by protesting. 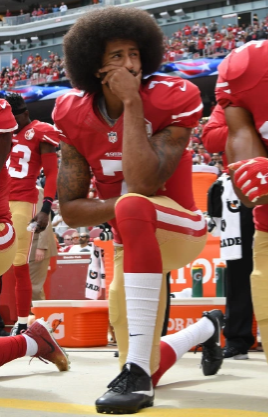 Colin Kaepernick kneeling down during the national anthem

However, not all of the students at APB seem to agree that these protests are respectful. Freshman Anthony Garcia said that it is disrespectful when he stated,  “We should respect where we are from. These people are saying they don’t respect this country yet they are living here.” He claims that these players are being disrespectful because they are insulting the country that they live in.

When asking teachers whether the protests were disrespectful, 10th grade history teacher, Ms. Jang said, “I understand why people would think this is disrespecting the flag. People have family who have risked their lives or have died for our country and the flag. People have to acknowledge that these players are not protesting the flag, they are protesting the obvious injustices in our country.”

These actions went unnoticed for a while but when these actions surfaced our president, Donald Trump commented with no remorse stating that unless the NFL bans anthem protests, “NFL players are going to hell.”

When students and staff of Animo Pat Brown were asked what they thought of the president of the United States speaking so foully of this situation, they all had similar answers. 10th grade history teacher, Ms. Jang said, “Trump should know better than to use that kind of language”.

All in all, the majority of people at APB believe that these players have the right to protest.

Ms. Espiritu, 9th grade composition and English teacher at APB said “ I hope that it gets people talking more and more about this issue.”

What people hope to see is others being more aware of the injustices occurring in America. These protests are believed to bring awareness just enough to make a change so that these players will not feel the need to kneel down during the pledge of allegiance anymore.