ACPA students that have transferred to APB for their senior school year, 2020-2021, have felt a rollercoaster of emotions as the school year comes to an end.

By: Marilyn Lemus and Yanaya Shields

The ACPA school logo, which got shut down. Source: ca.greendot.org 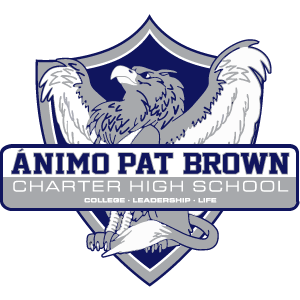 The APB school logo that former ACPA students are currently attending and graduating from. Source: ca.greendot.org

During the early stages of the pandemic which was in March of 2020, many students had to adjust to online learning which was difficult for everyone. Students from Animo College Preparatory Academy(ACPA) had to not only adjust to this change but unfortunately received news that their school was permanently going to be shut down due to low-funding.

When students left school in early March of 2020, ACPA juniors were preparing to take the SBAC test, which provides data that helps the district determine if students are on track to college. Around 2019, there was already some talk about the school being considered to shut down due to low performance on these tests, but students did not really take it seriously.

ACPA was preparing juniors in the 2019-2020 school year for this test to help the school meet its requirements to keep the school running, but due to the pandemic, juniors never got the chance to take the exam. Our principal Ms. Fowler tried her best but low-funds and low performance affected the closure of our school and brought many tears to students and teachers, especially students who were looking forward to graduating from ACPA.

Many ACPA juniors during this time had to choose what schools they will be attending for their senior year. Receiving this news made ACPA juniors who are now seniors feel as if they were unimportant and the school system failed them. Many looked forward to graduating from a school in which they built a supporting community with teachers and students. A good amount of incoming seniors moved to Animo Pat Brown(APB) for their remaining year of high school.

Students saw ACPA as a place where they can be themselves. Many students built positive relationships with teachers and staff. One former ACPA student said, “Teachers at ACPA gave life advice,” which impacted this student to feel more comfortable. Another student said, “It felt like a second home for me.”

Many students used these  programs and clubs as a safe place for them because the teachers and staff that assisted these programs and extracurriculars were very accommodating, very understanding and easy to talk to. These programs required students to stay hours after school and donate their own time to the program and students had absolutely no problem doing so because it was a comforting  space.

I (Yanaya) felt like the sudden change was pretty difficult. As a student I had to figure out where I was going to go and fast. When I heard that our school was getting shut down I was overcome with sadness. To know that my comfort place and second home was being taken away and there was nothing I could do about it was frustrating. I chose to come to APB because the majority of my friends were going there as well and I did not want to start my senior year, my last year of high school as a foreigner at another school. Overall APB has great support and nice teachers who make their office hours welcoming and comforting.

When hearing the news about ACPA being shut down, I (Marilyn) was in shock and could not believe it. ACPA was truly a place where I felt I could be myself and a place where I was supported no matter what. Everyone knew each other and I was really looking forward to crossing the stage with all my friends since freshman year. I chose APB because it was another Greendot school and one of my closest friends goes there and my close friends from ACPA all chose to apply there together. Honestly, I did not know what to expect from APB but I am glad that teachers there try their best to make sure we are supported enough.

A couple students from ACPA that are now part of APB have stated that they chose APB because it was another Greendot school and they were already familiar with their system. A former ACPA student who is now an APB senior stated, “APB has a good reputation in regards to education and it is the closest thing to ACPA.” Other students chose APB because they knew some students in that school and knew they would be welcomed.

Overall, many former ACPA students have said that their experience at APB has been good. Many mentioned how the community is supportive and others grew close to teachers even through a computer screen. One student stated, “Everyone was welcoming and I have had a positive experience in general, and as much as I miss ACPA, I don’t regret choosing APB.” Another former ACPA student stated,”It’s not what I expected but I can say I’m glad I had the honor to be a gryphon.”

As we’ve said many times throughout the article, a lot of teachers Who worked at ACPA are kind and genuine people who really wanted to see their students succeed. Some of the awesome teachers that we would like to give a shout out to are; Ms. Cervantes who was the 10 grade English teacher, Mrs. Amezcua who was the 10th grade Algebra/Geometry teacher, she was a huge help throughout the school and she also ran the lgbtq + Club, Ms. Castaneda who was the academic success teacher, and Mrs Fernandez who was the 11th grade U.S. history teacher.

Even though we had to go through these sudden and difficult adjustments we have managed to persevere and make sure we try our best to have a future that we are proud of.