With multiple damages, and theft reported by many schools, TikTok has a new trend all started by students.

By Christian Arellano and Oscar Arreaga 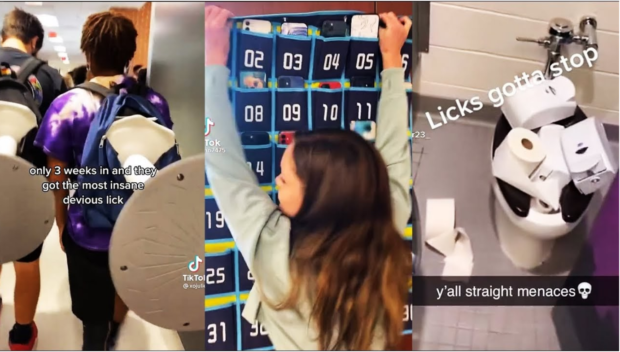 With the new TikTok trend currently going on, schools have faced vandalism, theft, and bad behavior from students.

This has also become one of the biggest TikTok trends, defined as “Devious Lick”. Schools have had to pay thousands of dollars to repair or replace toilets, sinks, bathroom doors, etc.

The trend currently has 1.3 billion views with a total of 19.6k videos on TikTok. All of which show students causing vandalism to the school bathrooms or taking items, even showing off what they’ve stolen.

“School property should not be damaged for clout, this is why we can’t have nice things,” senior Xochilt Garcia said.

“I would say the TikTok thing is terrible, because it’s like, it’s encouraging people to do this,” Animo Pat Brown Principal, Mr.Reed, said.

The PE boy bathroom is missing a bathroom stall door, and as a result, Mr.Cieply locks the bathroom during non-instructional time, during certain periods.

Mr.Reed also mentions a few instances of vandalism committed at Animo Pat Brown charter HIgh school, “There’s been a couple other little things that we’ve talked to some kids about some kids playing with, like the hand sanitizer”.

In the other boy’s bathroom, there is a door missing a bathroom lock. Likely as a result of the trend.

Google has shown multiple searches for this trend. All being monitored and added up to show numerous times devious lick was becoming more and more known.

Students have been prosecuted, suspended, or banned from their schools because of this issue. With more and more students being encouraged to commit acts of vandalism and theft.

Schools have been affected by having to pay for the many damages they have faced along with lost items. From stolen computers, chargers, soap dispensers, to damages to the bathroom doors, toilets, and sinks.

Soon after the trend began to create an alternative trend known as “Angelic Yield”, where it initially looks like the one recording it is replacing what was stolen or broken.

TikTok themselves have since removed the hashtag “devious lick” and taken down videos related to this trend. Unfortunately students still upload videos even after TikTok interfered causing more schools to pay money from their pockets.

The trend, thankfully has not resulted in too much damage for APB, the cost is a couple thousand dollars but students are discouraged from taking part in this trend.