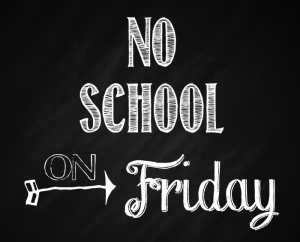 This picture demonstrate the idea of no school on Friday.

Many schools in 21 different states are reducing the school week from 5 days to 4, extending the school day by 1 hour. Some of these states include, Arizona, Colorado, Georgia, and Minnesota. California however, still remains indecisive. The objective of this proposal is to save money for the schools and to provide more homework time for students.

Many people argue that shortening the school week would only hurt the students’ performance on their classwork. For example, Ms. Barbero, office manager here at APB (Animo Pat Brown), said that, “with two days off a lot of kids already don’t come to school.” Teachers and staff worry that the students’ attendance would decrease if the week was shortened because students would feel less motivated to attend school on the last day. However, other teachers like Ms.Yokota say that a shortened week would benefit students because it would allow students to get engaged in extracurricular activities. She also says that teachers would benefit from a shorter week because they would have more time to prepare lessons. This extra time would enhance the quality of the lessons taught, making the students benefit at an even greater level.

Educators all over the country suggested a shorter school week to save money. To this, Ms.Barbero responded, “At what cost, the students’ education?” This became a controversial argument because teachers in Minnesota argue that saving money would enhance the quality of the lessons by spending it on new resources that the students have never had the opportunity to work with before, whereas teachers at APB believe that reducing school days would have a negative impact on the students’ performance. 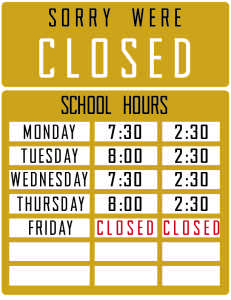 This image is a schedule of how most schools would like if they were to implement the new school week hours.

The schools that have already enabled this idea into action have reported a variety of results. Some of the schools benefited from this change, while others were negatively affected. The schools that benefited in all aspects, including academically and structurally, decided to keep and improve this new way of life at school. The other schools who saw negative results, immediately changed back to the 5 day school week without placing any thought of improvement. According to Ms. Freeman, English 12 teacher here at APB, “a three day weekend would make students hurt their improvement in reading and writing because they would use less time to practice these subjects”. Many schools’ academic levels were being negatively impacted, like Ms. Freeman stated, because students began to start slacking off due to the motivation to get school over with and enjoy their 3-day weekend.
Over time, this proposal will become more popular and perhaps will even be enacted in the remaining states. California might just be the next state to vote yes on a four day school week.