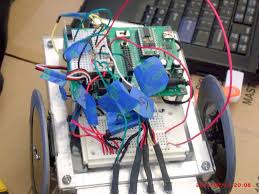 Their ultimate goal in the tournament for their robot was to differentiate the blue and red targets and place them in the corresponding goal. If the robot made an error and picked up the red target and placed it into the blue goal it would result in the deduction of one or two points. A blue puck that ends up inside the goal would lead in negative two points towards their score. If the puck of an opposite color ends up somewhere near the goal it comes to negative one point.When the robot places the blue or red puck in the correct color goal the team receives two points if its near the goal it concludes in one point.

Senior Yazmin Cervantes representative of the ultimate first place winners in the robotics tournament says, “The obstacles that I had to overcome was getting the robot to work… the winners were expected because my robot was the one who scored the most points out of everyone… some positive aspects of the tournament was getting to work with Alvaro and learning how to work with tools… the creation of the robot was hard in putting it all together and getting it to function… our robot was unique from the other schools because our robot was more complex and more colorful it looked that we put more work in it than them”.

In addition, Senior Christian Olivares the representative for the team that won second place says, “ There was many obstacles along the way when making the robot and until the day of the tournament as a whole as well… the winners were sort of surprising because for example, I never thought that my group was going to win second place and it is was a great honor that we were able to win second place with our robot… some positive aspects of the tournament was getting to know what I was capable of doing and working as a team to get the work done together… the process of making the robot was difficult because we had to put in all our effort to the making of the robot and we had to stay after school at times to stay up to date with the requirements… our robot was unique from the other robots that were representing the other schools because our effort was noticed in every one of them and therefore the result was all of the recognition’s that we were granted thanks to them”.

To conclude, senior Daniel Vasquez the representative of the group that won third place in the tournament says, “Yes there was many obstacles along the way but, nothing that we could not handle nothing out of the world… the winners to me were expected because the groups that won forced themselves to the end to win the place that they won… some positive aspects of the tournament was getting to learn to work as a team and rely on each other when necessary to get the things done on time… the process of making the robot was hard but, we got things done because our grade depended on it… our robot was unique because it was the best from all that is why we won third place but, I wanted to win first but, well at least it is something than not getting anything”.

To emphasize the diligent work of the robotics students and expand on the failures and successes of the tournament the coordinator and robotics teacher Mr. Osterhaus of these robotics scholars says, “We spent 10 weeks learning how to program after learning how to program the students worked on their hockey-bot for 12 weeks, we had multiple checkpoints they first had to design their robot after, they built their chassis and wired their sensors… the students were graded based on how well their robot worked in the competition… after the competition, the students were graded based on their effort and the majority received an A on the project… you always feel like the robots could have been better I would have wanted to see more robots score more points… next year I would want to teach students how to use motors and sensors better before starting the design of the robot… some positive aspects of robotics is that students were able to problem solve, innovate, and work collaboratively… in addition, the tournament exposed many students to engineering…in June we will have a robotics symposium where students will  show off their robots that they are currently designing and building  to help out in a major earthquake”. 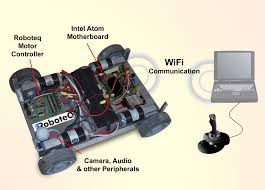