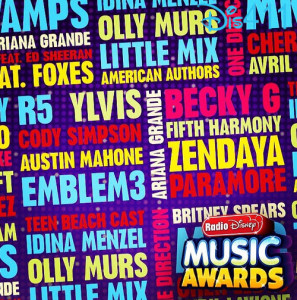 Radio Disney Music Awards is an annual show in which the winners are chosen by the fans. Throughout the show many singers and bands performed their latest single such as: (I can’t)Forget about you by R5, Replay by Zendaya, Can’t get enough from Becky G, Miss Movin’ on from Fifth Harmony,and many more. After some performances a lucky fan from the audience went to take selfies with their favorite singers. During the show they announced that Shakira was the nominated winner for the hero award, by the work and effort she made to help the people that need it.

The Radio Disney company had heard various fans sing the famous song, from the original Disney movie Frozen, Let it go and gave her the contingency to sing the song in the awards to, an adept 11 year old girl, Aaliyah Rose. The company gave her the news as a surprise in her performance of the national anthem. In the awards her spellbind performance was accompanied  by an orchestra and on the with enchanted fake snow all around to interpret the song in the movie.

Song of the year:

Come & Get it (Selena Gomez)

Breakout artist of the year:

Radio disney most talked about:

Best song to rock out to with your bff:

Me & My Girls- Fifth Harmony

Artist with the best style:

Made in the USA (Demi Lovato)

Favorite song from a movie or tv show:

Best song to dance to:

The fox( What does the fox say?)

Best song that makes you smile: