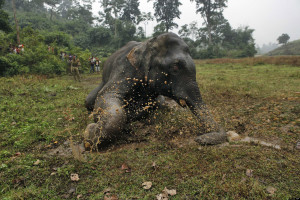 These past few years on the Savannah, African elephants have been slaughtered and still are being killed for their valuable ivory. The ivory that is collected by killing the elephants goes to a billion dollar industry. Just one tusk can be worth $63,000. The demands for ivory come mostly from China because they see the ivory as a status symbol. Since the years 2002-2011 elephants have been killed by poachers, adding the recent years 2012-2013 the total slaughtered elephants have been 65%. Everyday about 60 elephants are being killed. Poaching rates just keep increasing.If they keep being poached at this rate in about 1 decade elephants can become extinct.The United Nations gives elephants some protection, but clearly it is not enough. IFAW urges both consumers and politicians to oppose all ivory trade. But ending the ivory trade requires more than just legal treaties. In 1989, the Convention on International Trade in Endangered Species of Wild Fauna and Flora (CITES) banned international trade for ivory because of the amount of animals that were being killed. Many may not realize this but if elephants become extinct the forest itself will eventually die. This should concern everyone because elephants are a part of what keeps the forest and the world balanced. When asked junior Caren Flores what she would do to save the elephants, she responded “I wouldn’t do much because it wouldn’t make a difference. People out there aren’t going to listen and are going to do stuff that benefits them. For example in this situation they are killing elephants to make money.”  There are many ways to save the elephants. For example, one can just simply support the ivory ban, refuse to buy ivory, and demand that China ends its use for ivory.

Here is a link to a website that saves elephants.