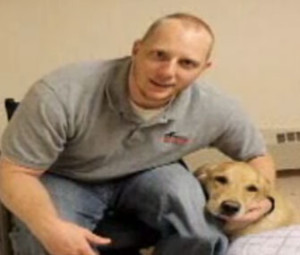 For the veterans Joseph, he had an appalling story in their lives that their guide dog is the solution to what they have gone through. For Joseph, he was a medic and was in war in Iraq where his incident happened, while he was trying to attend his friends that were injured Joseph then got hit by a bomb and lost his leg.

When he found out he lost his leg he went way beyond something that brought him to think of suiciding himself. After the war, his daughter was born 3 months later when the tragedy happened and she was the gift of him living again with his 3 dogs as well.

His dog Benjamin which helps him in his everyday life is like his helping hand that helps him get through tough things each day. For example, when Joseph can not bend down to get his keys or his wallet Joseph tells his dog Benjamin  to get for him which makes it a lot easier for him.

It was more easier for him to have his guide dog Benjamin as his friend that will never judge him or laugh for how he looks. Joseph thinks that his 3 dogs are like his 3 friends that died at war which is something memorable for him to know that the 3 dogs makes him feel like they are still with him. Benjamin helps him with his physical and emotional state.