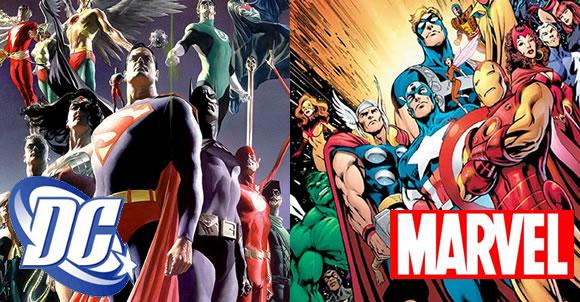 Marvel began in 1939 that eventually became widely known throughout the world. DC also became known after a while that it got sent out in 1934. For many decades, they have had a friendly rivalry that began in comics and proceeded to movies. DC was always known to have more of serious stories in which the hero would have to carry the weight of humanity on their shoulders. As for Marvel, they too carried the weight but not as much because they always had a lighter mood in which they could joke around a bit. Marvel has many characters that start off as just normal human beings that seem to have flaws but within time, they learn how to handle their powers and help the people. DC characters also start off as just normal human beings but their powers seem to be given to them in which they develop to use for good.

There has been many movies made for Marvel and DC. DC is known best for making really good comics but Marvel is in the lead for making very good movies. The thought of having a Marvel vs. DC movie is a very interesting idea that many people would like to see. “ I’d expect epic battles between the villains,” said Andrew Mendoza math teacher in APB. He also stated how he was a Marvel fan and his favorite character was X-man. Johan Aparicio, a junior in APB agrees with Mr. Mendoza because he also expects a lot of action. However, he is a DC fan stating that his favorite character is Batman. Sergio Sanchez, a senior at APB was a fan of both sides. He states that the thought of having a movie on them would be something very exciting to see because there is a huge debate between the two. He does not want to be a part of the debate but he still has favorites. On the side of Marvel, he chooses Iron Man and for DC, he chooses Superman.

Some students at APB chose between Marvel and DC. Out of 68 students, 41 sided with Marvel, 7 sided with DC, and 9 sided with “other”. If there was a movie to be presented in which there was a great battle between the two, Mendoza argues that Marvel would win. He had one name that backed up his entire reason as to why they would win, “Wolverine.” He took Wolverine as the winning source because he can regenerate so that makes him unstoppable. However, Johan stated how DC characters are more intelligent than Marvel characters because DC created their own techniques like Batman who constructed his own gadgets to use to become a hero. Sergio said, “DC would win because of Superman. He is strong enough to destroy the entire planet so he’ll manage to wipe out all of Marvel.”

Overall, APB fans from either Marvel or DC have their own opinions on the thought of having a featured movie on Marvel vs DC. They would expect a lot of epic battles between Marvel and DC like Mendonza and Johan said. Furthermore, some APB fans did not believe that Marvel and DC Heroes could unify. There will always be various opinions on both sides, but there friendly rivalry is what will always keep them alive. As Sergio stated, the likes of the stories from each side can lead to one question, “Do you like aliens or people who use tech here on Earth?”