Group A and B

Group A consist of Brazil, Mexico, Croatia, and Cameroon. This group contains two teams that had a hard time qualifying,Mexico and Croatia, and the other two teams didn’t have a hard time qualifying, Brazil and Cameroon. The players to look out for, according to FIFA are,”Neymar (BRA), Fred (BRA), Thiago Silva (BRA), Oribe Peralta (MEX), Raul Jimenez (MEX), Samuel Eto’o (CAM), Alexandre Song (CAM), Mario Mandzukic (CRO) and Luka Modric (CRO).” Also according to FIFA the group that is most likely to prosper is Brazil. Group B consist of Spain, Netherlands, Chile, and Australia. This group contains the most recent World Cup winner,Spain,who people are most excited to see play. For this group the players to look out for, again according to FIFA, are “Xavi (ESP), Andres Iniesta (ESP), Xabi Alonso (ESP), Arjen Robben (NED), Robin Van Persie (NED), Rafael Van Der Vaart (NED), Arturo Vidal (CHI), Alexis Sanchez (CHI), Claudio Bravo (CHI), Tim Cahill (AUS), Lucas Neill (AUS).”The following links will give you more information for group A and B.

Top 13 Players to head to the World Cup

The teams in group E are the following: Switzerland, Ecuador, France, and Honduras. These teams will start facing off starting June 15 2014. Group F Contains the following teams: Argentina, Bosnia-Herzegovina, Nigeria, and Iran. Some statistics reveal that from the top teams from the list are France and Argentina. Despite the fact that Nasri Abidal left the France squad, the team is still more determined and motivated. Argentina is more known for their motivated players, there are statistics that show that Argentina might take even take the win this year.The following links will give you more information for group E and F. 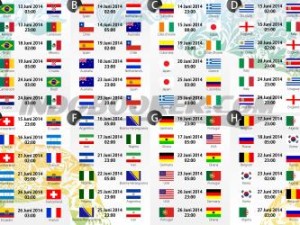 Group G will be hosting the soccer matches between Germany, Ghana, USA and Portugal. Group H will be hosting the matches between Belgium, Russia, Korea and Algeria. The top known countries with skillful players in the attacking positions are Germany, Belgium, and Portugal. With star players Cristiano Ronaldo from Portugal, Eden Hazard from Belgium, and Lewandowski from Germany. These players are sure to make the games interesting for us, with plenty of goals toward the opposing international teams. However, the international team of Germany is fortunate enough to have one of the top goalkeepers there is in professional soccer; Manuel Nuer. Germany is sure to get far in terms of the World Cup this year. The following links will give you more information for groups G & H playing in the World Cup.

Entertainment, Journalism 2013-14, Sports
One comment to “Innternational Teams Starring in the World Cup 2014”