First period ended and everyone heads out the door. I’ve been needing to use the restroom but I didn’t get the chance due to lectures and the 15 minutes rule. I start rushing to the restroom but there is already so many people inside. After waiting a minute to finally get inside I rush out when I hear the 1 minute warning bell ring. I step out to find students rushing down the hallways to get to their classrooms on time. My teacher is standing near the door, ready to close it once the final bell rings. Luckily, I manage to get there on time with only a few seconds left. However, a classmate did not make it on time and so they were forced to wait outside to receive their detention from the admin.

Last year, the school was very silent in the sense of having a bell system. Students would get to class 2-3 minutes late and that always affected the planned lessons for the day. Teachers would need to constantly tell their students to get to class on time; it was truly a hassle. However, things have finally changed. This year, there is a new bell system which hasn’t been able to be ignored by anyone. As known, students who attend to class late recieve a 15min detention every time. If you are late 3 times, students will lose their free dress privileges. Some students actually think that these punishments are fair.

Sophomore Jario Echeverria believes that it is a fair punishment because we have 5 minutes to get to class. However, if it’s a restroom problem it is unfair because restrooms do get a bit pack. When Jario hears the bells it lets him know that he has five or less minutes to get to class and it helps him be more prepared. “The bells give warnings” said Jario,  “before, people were late because they didn’t know how much time was left.” He thinks that the bells should stay because “it is pretty good way to keep people on their toes” claimed Jario. In addition, he argued that the students can’t slack off and blame it on the time because we have the clocks and bells. The bells have not impacted Jairo because he still continues to be as punctual as before, similar to other students . 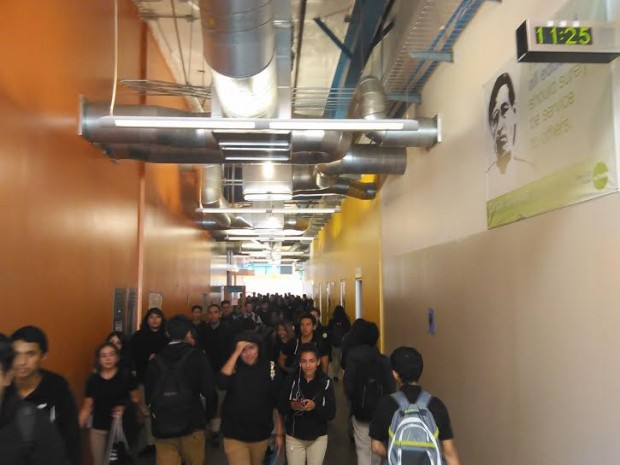 Senior at Animo Pat Brown, Ana Marchan states that she has always been on time and the the bells do not affect her punctuality. Her reaction to the bells at school, is warning that she has to get to class which she says “it sucks”. Ana believes that she has seen a difference between last year and this year. Students have actually been arriving on time, something that wasn’t happening before. Due to this major difference she believes that the bells should stay because they are helping students arrive to their classes on time. If students fail to arrive on time to their class, they get detention and Ana said “Yes the penalty is fair because they are given enough time to get to class on time.” Just like Ana, many other students agree that the bells should stay because it helps students who were never on time get to class right on the dot.

Victor Perez, a senior at APB reveals that the new bell system along with the punishments have affected his punctuality. “Well during passing period I was always late” said Victor, “it was an everyday thing”. Now he is always on time even if it’s just a minute before he manages to be in class on time. He argues that the bells should stay because just like it has helped him be on time, it has helped others too. “Kids now come to class on time. Last year we use to have many students get tardies during passing period…Now we don’t see as many students roaming through the hallways like last year” stated Victor. He mentioned that the penalty is reasonable and effective.

Junior, Karina Gonzalez, believes that the penalty is helpful because the teachers get the time that was wasted. She said that “The difference is that we get to class on time and we have clocks to let us know what time it is and see how much time we have left to get to class.” The bells is something that most students find very helpful and effective. Karina’s behavior has changed do to the new bell system and policies “I never get to class late anymore” she said” so yes it has changed my behavior in a way”. She thinks that the bell system and policies should remain the same because it helps students get to class on time.

At the end of the day the students at Animo Pat Brown seem to not hate the bell system and its outcomes. On the contrary, they seem to actually find it convenient and helpful in getting them to class on time.